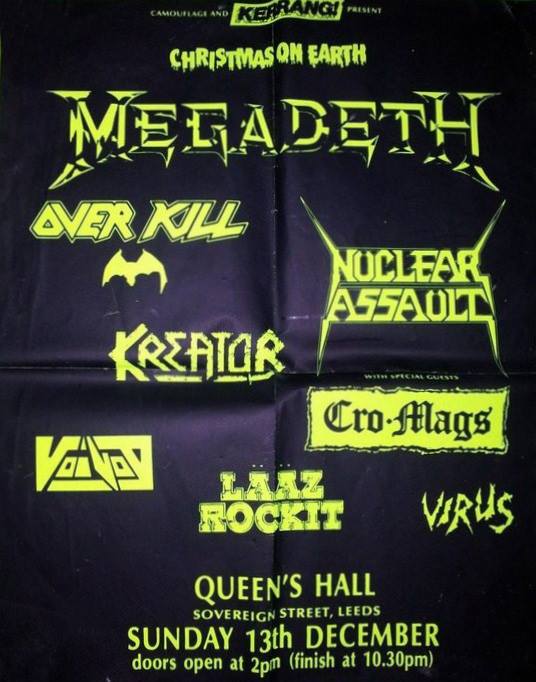 December 13th, 1987 It had to happen one day, the UK’s first major thrash festival, but where were the people of the UK? Only 3,500 filled a hall built to hold 6,000 and there’s only one UK band on the bill… what a disappointment! In fact, the day was full of disappointments, with the biggest let down being the non-appearance of Voivod who were caught by the great customs service and stuck in Belgium.

I was at a low ebb coming to this show, and it wasn’t until Lääz Rockit appeared that my spirits were at all lifted. Virus had been given a disgusting treatment by the sound crew and organizers, and had rightly, in my opinion, refused to carry on after only 20 minutes of their set. Considering the organisers had asked Virus if they could provide some of the equipment for the bands that were following, they gave them some of the worst and most unprofessional treatment I’ve ever seen dished out to an opening band. Whether you like Virus or not is not important, no band deserves to have their set destroyed.

Lääz Rockit of course changed all that and I started to enjoy the show at last. ‘Last Breath’ opened the set and immediately it became obvious that favouritism was at work, because Rockit’s sound was near perfect. Now, I don’t blame the band’s for the blatant difference, because all bands go out to please the crowd, the blame must lay firmly with the organisers on this. All I’m saying is that if Virus had been given as fair a crack as Rockit, more people would have been happy. 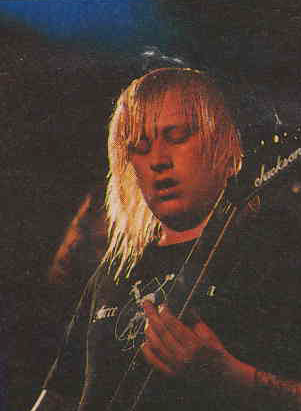 Anyway, Rockit were going through a really excellent set, pulling the best tracks out from their three albums; these included the pacey ‘Backbreaker’, ‘Forced To Fight’ and ‘Say Goodbye M.F.’. The band won the audience over very quickly and the fiasco wrongly attributed to Virus by much of the crowd was quickly forgotten. Michael Coons and the lads were very genuine and the crowd really respected them for their commitment to the show. Me, I loved the personal attack on Kerrang!’s Howard Johnson; whether he sucks dicks I wouldn’t know, but the t-shirts make no bones about the band’s attitude towards Mr. Johnson. All fair in love and war!

Lääz Rockit really got the crowd going with some really heavy material, delivered with that famous panache that keeps the band out of the thrash circle and firmly on the road to an excellent metal band.

Although Lääz Rockit had gone down surprisingly well, it wasn’t really until Kreator hit the stage that the Leeds audience started to resemble anything like a thrash crowd. Kreator also brought the first stage-diver of the day, who managed to slip past the rather heavy-handed security staff, climb to the top of the PA and hurl himself virtually head-first down into the crowd, some twenty five feet below.

This was actually the first time I’d witnessed Kreator live and I was most impressed indeed. The band powered their way through the likes of ‘Behind The Mirror’, ‘Flag Of Hate’, ‘Pleasure To Kill’ and ‘Terrible Certainty’ with lightning precision, and took away the initial disappointment of Voivod’s non-appearance, which was announced just prior to Kreator taking to the stage.

The only low point of Kreator’s set was Ventor’s drum solo. I’ve never been over inspired with the guy’s drumming on vinyl and I would have much preferred to see the band slip in another song than have to put up with an uninspiring solo in a relatively short set.

But overall, an excellent performance from Kreator and hopefully it won’t be too long before the German techno-thrashers are back on British soil, this time as a headline act.

After the impact of Kreator it was quite difficult for the crowd to pull their acts together for the next band, but still they gave them a big welcome. The Cro-Mags had had a disappointing turn out in London, but here they seemed to have quite a substantial following. Some people had said to me that the Cro-Mags could be mismatched here, but as ‘We Gotta Know’ got into its stride I didn’t feel that the band suffered from any problems on that front. The sound was quite good and the energy of the band was nice to see in front of such a big audience. Never over awed, the band debuted some new tracks, including ‘Servant Of The Senses’, and pulled a lot of the set from The Age Of Quarrel, the successful album from GWR Records.

More metal orientated than some of the US hardcore scene, it wasn’t difficult for the Cro-Mags to please a majority of the audience. Early on they had suffered from the “British Crowd Critical Eye”, something often experienced by US acts new to the UK, but by ‘Malfunction’ and ‘Street Justice’ they seemed to have won the crowd over and began to capitalise on it. Much fun was had by all, including the members of the band; some of whom even managed to clear the moat between the stage and the crowd. The Cro-Mags had gone down well. Their sound and stage presence was good, but never over powering, and their music heavy enough to endear them to the crowd. 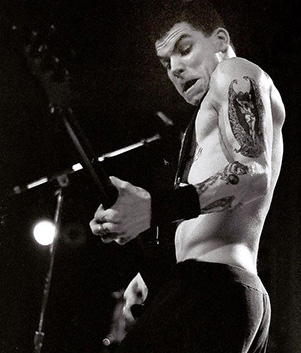 Next band up were Nuclear Assault and I’m afraid once again this was a disaster. Okay, so I’ll admit that the enthusiasm of the band makes them hard to follow on stage from a sound engineer’s point of view, and I realized the difficulties he had during the set, but at a top concert like this none of these difficulties should ever occur. The sound had picked up in leaps and bounds during Lääz Rockit, Kreator and the Cro-Mags, so why should it disintegrate again here? I don’t know, let’s just say that although the band tried hard the sound was a fiasco, not far off the Virus tragedy. ‘Game Over’ was audible, but when John Connelly began to sing it just seemed like a waste of effort.

Nuclear Assault are a band that really get the audience going and on cue the crowd loved them, but it really was a shame that you couldn’t hear any more than the guitar or the drums. ‘Buttfuck’ made its customary appearance, with Dan Lilker audible on the vocals, and so did a new track, ‘Survive The Great Depression’, which from what I could hear sounds like an excellent advert for the band’s new recordings due out on an LP in a few months. Dan dedicated ‘Stranded In Hell’ to Voivod, stranded In Belgium, and John once again brought up the subject of a lack of UK acts on the bill.

Nuclear Assault are very much a street band who play for the people, whatever the circumstances, and the sound was forgotten as they encored with a furious version of ‘Hang The Pope’. I’m sure I speak for the majority when I say “hang the sound engineer”, but nevertheless, I still enjoyed the sheer dedication that Nuclear Assault have to their fans and it was nice to hear some of the excellent sounds of ‘Radiation Sickness’ and ‘Sin’, even if they were distorted by a poor PA.

Well, it proves something doesn’t it, sound checks should have been done for all the bands. “This place is horrible for sound because it’s so echoey”, so went one sound engineers phrase as we discussed the fate of Nuclear Assault. Well I guess that says it all doesn’t it, and it’s unfortunate that the crowd always blame the band first before they blame the sound men or the organisers.

Overkill had no such problems, their sound being the best of the day and their set being in my opinion marginally the best. The band started with ‘Deny The Cross’ and from then on they simply couldn’t fail. Bobby Gustafson had more power under his fingers than seven guitarists could have had, and vocalist Bobby Ellsworth was given the freedom to fire his voice all over the arena. Drummer Mark Archibole (who has since left the band) was also excellent and a fine replacement for Rat Skates. Honestly, it was hard to fault Overkill who revelled in their chance to play so high up a bill that included bands bigger than them, at least among the English following. They packed some real meat in early on with ‘Hammerhead’ and ‘Powersurge’, and they proved that commitment really pays off.

Overkill were never below their station on the bill and they certainly stole the show so far. “We Don’t Care What You Say” banners welcomed ‘Fuck You’, which was followed by my two favourite numbers, ‘Electro-Violence’ and ‘Overkill’. I revelled in the good sound and this was the best ten minutes of the day. Overkill were fantastic, something special on a day of disappointments and the crowd duly thanked them with one of the biggest roars of the day.

Now, I believe Dave Mustaine isn’t too pleased with my criticism of his attitude when the old Megadeth line-up played in London earlier last year. Well, I firmly believe and stand by what I said then, but I would also like to say that Dave has redeemed himself in the eyes of the British audience. This Megadeth show was miles on from that Hammersmith debut, and Dave’s behaviour to the crowd was exemplary, which was nice to see because it meant that nothing could damage the effect of great songs like ‘Wake Up Dead’, which opened the show, or the effect of new faces Jeff Young (guitar) and Chuck Behler (drums) on Mustaine master pieces like ‘Looking Down The Cross’ which followed. The sound could have been a little clearer early on, but there was no fiasco here so I guess we should all be happy about that.

As you will all know, Megadeth have a new LP, So Far, So Good…So What!, out in the near future and tonight gave Britain three chances to hear what the Mustaine brain has created for our delectation in ’88. The first of these was an evil little number called ‘Mary Jane’, which has an eerie riff. Later, there was the doomy ‘In My Darkest Hour’ and ‘Hook In Mouth’. Then finally, not a new song but a rehashed ‘Anarchy In The UK’, which was an interesting version of the old Sex Pistols classic. In between came the whole of Peace Sells as well, so there was plenty of good stuff to take in, especially when ‘Devil’s Island’ and ‘Peace Sells’ were combined.

The crowd seemed to have come alive at last and Megadeth went up and up the placings, threatening even Overkill’s good performance. ‘Mechanix’ was the track that summed this set up with its electrifying sound.

Megadeth have definitely made a trip to Britain this time, and Britain has finally witnessed the band as it should be. 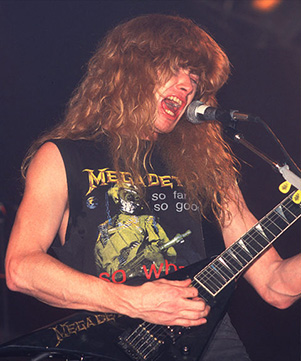 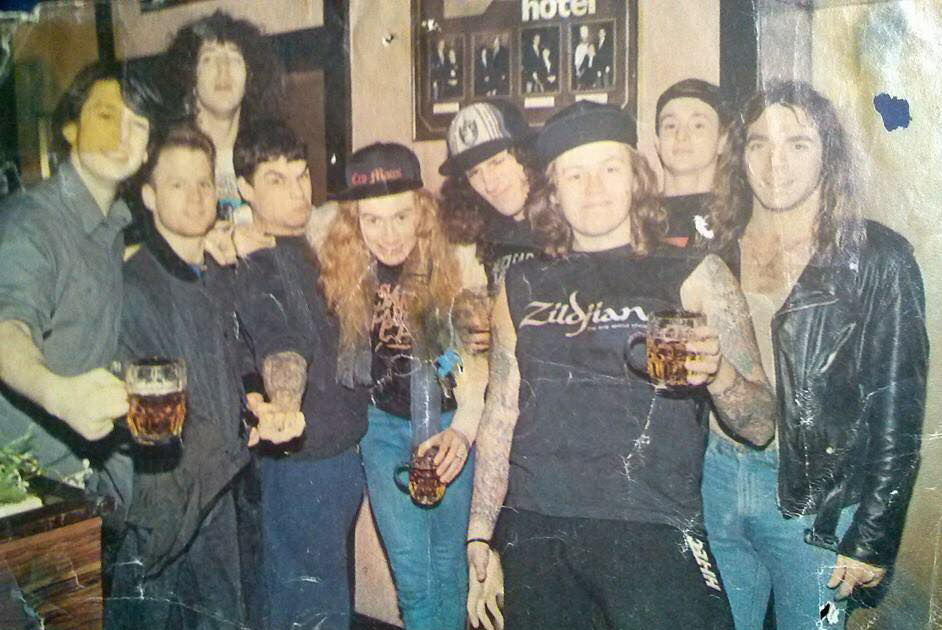